Politicians Aside, The Workplace Is No Place For Incivility

As a teacher of etiquette to college students and tomorrow’s business leaders, I am deeply concerned about the incivility that is seeping into our offices, schools, and the political discourse we hear. It’s as if we’re all talking at each other with no one listening. We are like the “talking heads” on a nightly news show–dismissive of all views that don’t conform to our own. Whether the national presidential election’s toxic name-calling and mud-slinging has caused–or is a product of–the rise in rudeness is impossible for me to say.

But this I know: A culture of insolence and bravado has permeated numerous work environments, causing employees to disengage, productivity to plummet, and customers to walk. Workers can’t stand the stress, nor do they deserve it. And employers cannot afford to ignore the cost that incivility expends on their bottom line.

A study by professors at Georgetown and Arizona State universities found that rudeness at work is both widespread and, sadly, on the rise. Employees regularly subjected to bullying from their bosses, belittling from their co-workers, or abuse from their customers, experience reduced performance, dampened creativity, and low morale.

If there were justice in the world, rude conduct at the workplace would always have a way of catching up with the offenders. Employees with diplomacy skills would rise above self-interested bullies when raises and promotions rolled around. But sadly, this often isn’t the case. Bullies are often part of upper (or middle-upper) management. When their aggressive, demeaning behavior is reported, sometimes the powers-that-be rally around the bully. Also, office bullies are not all that different from the bullies one might find in a playground. If you report on bullying behavior, sometimes the bully retaliates against you.

Until the violations of civil conduct are redressed at your workplace, here are some ideas on how to rise above bad behavior:

Set boundaries on offensive remarks.
Name-calling has become a national pastime. But while sexually offensive remarks sometimes turn up as sensational sound bites in the media, these insulting remarks are undeserving of an audience around the proverbial water cooler. If people at the office try to engage you in their offensive banter, let them know you’re not amused and walk away.

Don’t make jokes at another’s expense.
Sarcasm along the lines of “Thanks for dressing up,” to an officemate whose work wardrobe tends toward slovenly may elicit cutting remarks from other co-workers. But used unsparingly, sarcasm can come off as malicious. Don’t poke fun at a co-worker’s unusual dress or demeanor. Be sensitive about other people’s feelings.

Disengage when discussions devolve into insults.
Personality conflicts in an office are nothing new, but if your input or ideas set someone off, don’t engage. Make an appointment to sit down with your nemesis and make the case that it’s in both your best interests to peacefully coexist. Settle arguments quickly. “Let’s agree to disagree on this one and move past it,” you can suggest.

Keep your emails squeaky clean.
Technology sometimes makes us feel like we are in a “bubble,” giving the vindictive among us license to rant. If a venomous email from a client or customer lands in your inbox, resist the temptation to fire off a scathing response. The more irate an email makes you, the more imperative it is to slow down, take a breath, and walk away to clear your head. Wait until you cool down, and only then write the response you deem appropriate. You still may want to stick it in your drafts folder until the words are ultra-composed and professional. If the spiteful email is from a boss or co-worker, don’t email back, but endeavor to clear the air in person.

Hold back on harangues when faced with dissenting views.
From the succession of candidate debates through the primary season that often degenerated into name-calling sessions, striking back with contempt at anyone with an opposing opinion sometimes appeared to be “the new normal.” While polls in November will reveal whether converts are truly won through caustic tirades over the airwaves, such bluster in the workplace will drive both employees and clients away. Those bosses who genuinely listen, smile, thank others, and show they care ultimately win the hearts and minds of their staff. 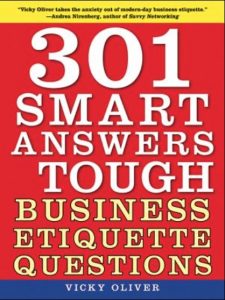 Times change, and so do standards of behavior in the office. 301 Smart Answers to Tough Business Etiquette Questions provides the answers you need to survive daily life in the modern workplace, plus unspoken business rules you are expected to know but have never been taught.